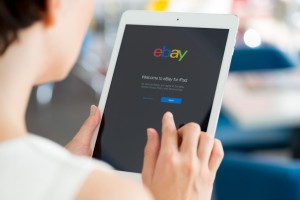 At first it was an issue of rethinking same-day delivery for eBay.  In December of last year, eBay made a move to officially pull eBay Now from the app store.  The e-retailer appeared to shift toward integration of the stand alone app into its’ main mobile app and website instead.  The app allowed mobile shoppers to buy from local retailers and have their online items delivered for $5 the same day.  However, recent moves communicate much more, even if eBay has turned away from same-day delivery toward a focus on store pick up.

A recent report by Yahoo Finance discussed how eBay may not be interested in same-day delivery.  EBay has signed a deal with Woolworths in Australia, giving eBay shoppers the convenience of making online purchases on its’ site and then pick up from Woolworths stores.  The e-retailer also has previously partnered with Argos in the UK to do the same thing.  Online retail is projected to increase to $500 billion by 2018, and in-store pick up will have a lot to do with these figures.  Wal-Mart and Macy’s are just two of the many big name retailers offering in-store pick up, pushing to meet shopper demand.

The article mentions how eBay feels in-store pick up meets the demand of not only customer convenience and speed, but also no shipping costs.  EBay feels customers will opt for faster delivery without paying for shipping.  A Harris Interactive survey of 2,241 US adults showed that 70% of consumers don’t want to pay additional charges for overnight or same-day delivery.  This means if given the choice to not pay for shipping, customers will opt to order online and simply pick up their items from their local store.

EBay also sees this model as being beneficial for returning defective items directly to a physical store versus shipping it back to them.  This minimizes the wait time for customers to get their purchase in their hands.  A same-day courier like 1-800 Courier is a viable option for shoppers that simply don’t have the time to return the damaged items to the store and bring the corrective items back.  The Chicago courier has a national footprint for same-day delivery and can perform last-mile deliveries for customers, as well as retailers like eBay.

In spite of eBay’s potential change in business strategy, other web-retailer leaders are still all in with same-day delivery. Amazon has a multitude of investments into the same-day delivery, including more than 50 fulfillment centers nationwide, expansion of the service into 8 major US cities before the holiday season last year, the opening of its’ very first physical store location in Manhattan, and the launching of bike service there as well.  The physical store location is primarily for online customer store pick ups, but also for last-mile deliveries.

Google offers Google Express with same-day or overnight delivery, competing with Amazon.  Consumers can place orders online for goods from retail stores like Walgreens, BestBuy, Toy-R-Us, and Staples, then Google Express vehicle delivers the items same-day or next-day to its’ customer’s front door.  As eBay makes it adjustments, there will be more online retailers making changes of their own to keep shoppers coming back for more.

Reference:  3.9.15, Yahoo Finance, Patricia Garner, Why eBay is not interested in same-day delivery 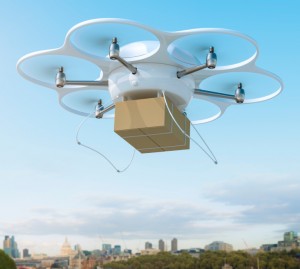 It may seem far-fetched to use flying drones to deliver online purchases to your front door. However, Amazon is pursuing to make it a reality. Same-day delivery has become a viable option for online retail growth and all types of retailers are abroad, even Ace Hardware is testing the service. Drone use is another way that Amazon has tested and finds it fits their business model. A new announcement by Amazon shows it is another step closer to the floration of drone delivery.

Bloomberg News recently reported that Amazon has received approval by the Federal Aviation Administration (FAA) for launching its’ same-day delivery drone program. The FAA has given the retailer a waiver allowing flights as fast as 100 mph and 400 feet off the ground, according to a letter posted on Amazon’s site. Amazon vice president Paul Misener spoke to Congress, stating that an earlier FAA approval for using drones applied to an earlier drone model no longer used. Therefore, it isn’t beneficial for new drone implementation. With the new approval, Amazon appears to have high hopes that same-day delivery drones will be flying soon.

Last year, Amazon CEO Jeff Bezos made it known on 60 Minutes that the retailer had plans to launch Prime Air via “octocopters” or same-day delivery drones. Shoppers would receive their online items within thirty minutes or less. 86% of Amazon’s orders are small package items and actually meet the drone delivery criteria. It makes sense for Amazon to be so adiment about implementing same-day drones. With the enormous amount of distribution centers the retailer has across the US, the drones will bridge the distance gap like no other online retailer is doing thus far. It would indeed be revolutionary, as more than likely, other retailers will follow.

The FAA approval appears to not have come at a more pivotal time. Amazon strategically launched same-day delivery in several major US cities right before the holiday season last year, including New York City, Washington DC, Philadelphia, Dallas, Indianapolis, and Atlanta. In addition, the service was released in Miami and Baltimore in March. There will probably be more same-day delivery in other US cities to come this year. Amazon could be headed towards these same cities being the first for drone use.

Amazon’s Prime members already have Prime Now, the e-retailer’s one-hour delivery service, at their disposal. Prime Now one-hour delivery is $7.99 and two-hour delivery is free, although Prime Air is set to be much faster. Members have tens of thousands of products they can buy online, from household items to electronics. Most of these are small items also, which will meet the drone carrying requirements.

A number of retailers won’t be able to deliver via drones due to costs; however, they can partner with a same-day courier like 1-800Courier to compete online and also for easy implementation in major US cities. The New York courier has a nationwide footprint and can create logistical same-day solutions as well. Either way, most retailers are going to need same-day delivery to meet today’s online demand. 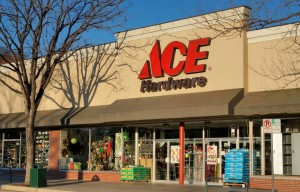 When we see online products being delivered the same day, we normally aren’t thinking about tools.  However, Ace Hardware wants people to now think differently.  Ace now says that tools can have same-day delivery too.

The Chicago Tribune has reported that Tool retail leader Ace Hardware is rolling out a testing program for same-day delivery in 33 of its’ 4,400 stores nationwide.  These select stores are found in Arizona, Colorado, Illinois, Maryland, Texas and Florida.  There is also one hardware store in Chicago that will be a part of the pilot same-day delivery launch also.  It appears that these pilot stores are just a start for Ace.  There will be more same-day service stores to come.

Your latest Dewalt power drill or Craftsman tool kit are now just a few of the unexpected retail item that we can now get delivered within hours.  Another retailer, pet food company Petco, falls into the same category.  Like Ace, Petco launched testing of same-day delivery in San Francisco and Boston.  Instacart is Petco’s delivery partner, set to pick up and deliver dog food, birdhouses, kitty litter and other well-known items for pet care.  For cost savings and delivery efficiency, most same-day retailers partner with a same-day courier like 1-800 Courier to perform the deliveries.  Currently, Ace store associates will perform the deliveries; however, as the same-day delivery program expands, Ace may very well follow suit.

For online orders placed by 1pm, customers can use Ace’s Express delivery service available within 5 miles of any of its’ participating testing stores.  Same-day delivery will be only an additional $5 fee to a customer’s order.  The pricing falls in line with most same-day pricing.  For example, Petco’s service fee as fast as within an hour, costs between $3.99 and $5.99.  Department store chain Macy’s launched the service in 8 major US cities, including San Francisco, Los Angeles, San Jose, Seattle, Houston, Chicago, Washington DC, and New Jersey.  It’s service is priced at a flat fee of $5 for orders over $99.  Shoppers with smaller orders pay standard shipping rates, plus the flat rate.

Even Wal-Mart offers same-day delivery in multiple US cities.  Walmart To Go costs $10, regardless of the order size and in some parts of Canada the service is free, competing with Amazon there.  Good low pricing is attractive to online shoppers that are use to getting deals.  Like Wal-Mart, Ace Hardware have the advantage of brick-and-mortar store locations have enough locally-sourced products for low pricing to work.  This is exactly the outfit for malls, which in the Chicago Tribune, Woodfield Mall and Water Tower Place were examples that started offering on-demand car service last year.  Customers can make their purchases at the store, and have their items delivered home as they continue shopping or movie watching.

Ace’s new program began January 26th and is an extension of the tool company’s online order and pick up in store service currently available at 1,600 Ace stores.  The creation of omnichannels is what retailers are after, as online businesses can be more of a strength and help balance local store sales.  Online retail is forecasted to increase to $500 billion by 2018, therefore, this is the right move for Ace.  Other retailers in a wide range of industries are all setting up ways to make overall shopping convenient.  1-800 Courier is a Chicago courier that can help Ace Hardware and other physical store retailers optimize on same-day delivery as e-commerce grows.